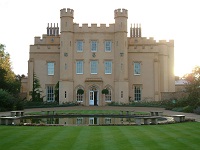 The Delights of a Regency House Party

It is a truth universally acknowledged that a person in possession of a country house must be in want of a party.

There's plenty of reasons for that tongue-in-cheek statement. While the creme of English society during the Regency period adored London above all other places, August in London was hot, sticky, and stinky, with the Thames wafting up all kinds of odors in the summer heat. With Parliament generally out of session, everyone who was anyone found an excuse to leave town for cooler climates, often in the north of England. August 1 was also the start of grouse season, so if your dear Papa was fond of shooting the little birds, you probably headed to Scotland, where the best hunting was to be found.

If you didn’t have a lavish country seat where you could retire, you angled for an invitation to someone else’s country estate. This was a chance to lengthen the Season, to be with a select group of friends in a different setting. You might visit a distant relative or the family of a dear friend. If one particular gentleman had shown his interest, he might invite you and your family to the ancestral pile to meet his extended family and have a little more time to get to know each other. Such invitations came with the expectation that the young man was going to offer marriage, and soon!

Hosting a house party was not an inexpensive proposition. You had to feed, house, and entertain between six and twenty other people for seven to twenty days. Entertainments ranged from indoor activities such as musical performances, billiards, and amateur theatricals to outdoor activities on the estate (hunting, riding, lawn games) or in the nearby area (trips to see old churches and Roman ruins).

But even if you were the guest, going to house parties cost a pretty penny. First, you had to have sufficient outfits for breakfast with the family, tea in the afternoon, formal dinners at night, balls in the local assembly rooms, riding, walking to visit friends or nearby architectural wonders, boating in the nearby river or lake, lawn bowling, and any other interesting activities. Then, you were expected to provide vails (tips) to the servants who supported you while you were visiting—the groom who held your horse, the maid who cleaned your room, the cook who made your favorite raspberry scone, the porter who handled your baggage on your way to the estate, and so on. Some people even opted to stay in the stench of London rather than incur the costs of tipping every servant from here to there!

Others, however, lived for those events, where secrets could be discovered and kisses stolen. Much can happen at a Regency house party, and frequently does!


Want to learn how it felt to visit a Regency country house? Try one of the following books: