When you think of England, you may think of King Arthur and the Knights of the Round Table or the starting spot to reach the fabled halls of Narnia or Hogwarts. You may think of Big Ben and Parliament, or even the daring London Eye, one of the biggest Ferris wheels in the world. But what does Lady Emily, the heroine of Art and Artifice (previously La Petite Four) and the sleuth who identifies the murderer in Secrets and Sensibilities (previously A Dangerous Dalliance), think of England?

"It rains a great deal. That doesn't seem to change whether I'm at His Grace's townhouse in London or Bath or out in the country. On the other hand, because of the rain I have plenty of time to devote to my art. Oh, you'd like a tour? That's a bit difficult, what with His Grace having 38 estates sprinkled about all over the country. Let's stick to London, shall we?

My dear friend Priscilla Tate would insist that I start with Bond Street. This shopping paradise is by far her favorite place in London. Shoes, reticules, cakes, corsets, fabrics, bonnets: you name it, you can find it here.

I actually prefer some of the shops on St. James's. Here's Harris's, where they specialize in perfume and men's fragrances. I must agree with my friend Daphne Courdebas that it was a revelation to learn that men used fragrances. I wonder if that's why Sir Robert smells like cinnamon. And then there's James Cropper, with that enticing scent of sandlewood. So exotic. Where did I put my fan? 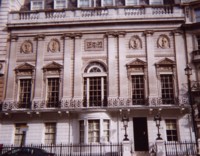 Of course, also on St. James's is that infamous gentleman's club, White's. See that bow window in front? That's where Beau Brummell sits to pass judgment on the ladies walking up the street. That makes it very difficult to ignore the fellows. Truly. Ask Daphne's sister Ariadne.

Then there's Hyde Park. Daphne and I love pelting down Rotten Row on our horses. There's nothing like a good gallop to clear your head.

When I wish for a solitary stroll, I find walking along the Serpentine to be very restful. 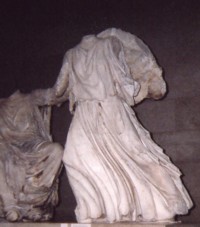 Of course, London is full of cultural significance as well. See here a portion of the Parthenon Marbles, brought back by Lord Elgin. Such sweeping grandeur, such artistic passsion! Unfortunately, I don't think he took very good care of them, as they were residing in a coal shed at Burlington House before the British Museum purchased them from him.

And when it comes to spiritual enlightment, attending a service at St. George's Hanover Square is just the thing. I much appreciate an edifying sermon and soul-stirring music. And you may stop laughing now, Miss Priscilla Tate, for it's quite true! As for you, dear reader, if you'd like to know more about how we four spend our time in London, I suppose you will have to read one of our capers such as