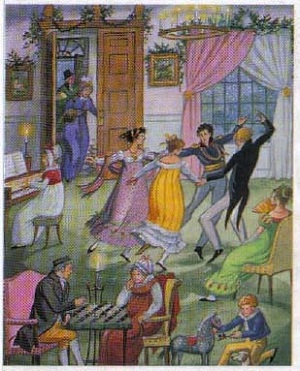 To start, Christmas wasn't celebrated in the cities as much as it was in the country. Not until the advent of Dickens' A Christmas Carol (1843) did Christmas become popular in London. In country homes where Christmas was celebrated, decorations went up on Christmas Eve and might stay up until Epiphany (January 6). Depending on the part of England, you might use evergreen boughs, holly, ivy, hawthorn, rosemary, and Christmas Rose (hellebore). You might also use mistletoe, although it grows mostly in the western and southwestern parts of Britain. However, if you had friends or relatives in other parts of the country, you could certainly arrange to have some sent to you via the mail coach. Our traditional mistletoe in the doorway would more likely have been a kissing bough--a hanging structure of evergreens, apples, paper flowers, and dolls representing Joseph, Mary, and baby Jesus.

Notice the lack of a Christmas tree, which did not become a widespread English custom until 1828. Before that time, however, some families with connections to Germany or America had them, as Germany had used Christmas trees since the 1400s and Americans since 1777. Period diaries mention Christmas trees in homes, so it was not an unknown custom even if it was uncommon.

You also would not have sent Christmas cards. The first such cards dated from 1836. Instead, you would have greeted your friends and family with "Happy Christmas," and then only on Christmas Eve and Christmas Day. 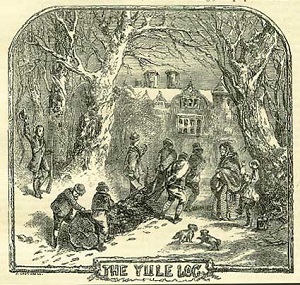 On Christmas Eve, you might celebrate with the lighting of the Yule Log, a large log felled from the nearby forest. It was deemed good luck to be the first to sit upon the log before it went into the fireplace. You lit the log from a lump of charcoal left over from the previous year's Yule Log. You might also play games with your family, or spend your time divining your true love.

You would not necessarily have sung Christmas carols. Some sources indicate carols were a Victorian tradition. Others indicate Wales and other remote parts of the British Isle had carols. Songs listed included "Deck the Halls," "Here We Come a-Wassailing," and "While Shepherds Watched Their Flocks by Night."

Christmas Day might start with a trip to church, followed by a lavish dinner of boar's head, which was really the head of a pig, as wild boars became extinct in England approximately 1185. You might also have turkey (which had been brought to England from the New World in 1550), along with plum pudding, march pane (what we often call marzipan), and gingerbread. Christmas Day was also the day on which a gift or tithe was given to the landowner. Note, however, it was not a widespread tradition to give each other gifts. Again, period diaries indicate it was more common to give a new toy to the children in the family than for the adults to exchange gifts.

The day after Christmas was Boxing Day, on which you gave presents or "boxes" to those who had given you good service during the previous year. It was also a traditional day for fox hunting.

You did not necessarily have to worry about snow near Christmas, despite the story of Good King Wenceslaus. According to several sources, weather in most parts of England is often warm and damp over Christmas. A notable exception is the Christmas of 1813, which was unusually cold. The famous Frost Fair that froze the Thames was the following January. However, near New Years, the weather generally turns colder, so that skating and sledding become possible.

As you can see, a Regency Christmas had some distinct differences from the Christmas many of us celebrate today. However, the customs practiced then, and in your own home, can be as distinct as the people themselves.

If you'd like to see how some fictional families celebrated Christmas in the Regency, try My True Love Gave to Me (formerly published as The Twelve Days of Christmas) or the novellas An Uncommon Christmas (formally published in the three-author anthology Mistletoe Kittens) or Always Kiss at Christmas, the prequel to my bestselling Fortune's Brides series.