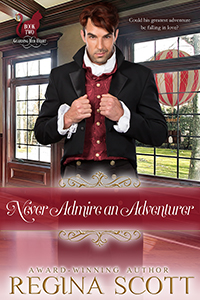 Kristof Tanner grew up dreaming of glorious adventures far beyond the little kingdom of Batavaria. He's followed his king and crown prince across Europe to England, but he never expected his first position there to be guarding the daughter of a wealthy businessman, who doesn't seem to have a care in the world. Still, it's hard not to see adventure calling in Julia Hewett's warm brown eyes.

Julia has been fretting under her father's demands for years. She won't allow him to dictate a husband, especially when he insists no less than a duke will do. So, when her father refuses to listen to her pleas, she concocts the most unsuitable engagement she can imagine-to her bodyguard. The charming Tanner is always up for a lark. If he plays along, they might both get what they want.

But it soon becomes apparent that someone really is stalking Julia, intent on her downfall. Tanner and Julia must work together to uncover the culprit and save her reputation and his. In doing so, they may discover that the greatest adventure of all is falling in love.

Want to make sure you know when this book is out? Sign up for my newsletter, and get two exclusive bonus novellas (plus a story from The Regent's Devices).