Under the Leadership of Gentlemen: Parliament During the Regency

The perfect Regency gentleman: He boxes at Gentleman Jackson's. He games at White's. He charms the ladies at Almack's with his polished address and ready wit.

But life as a titled gentleman was also affected by Parliament. The London Season came to be partly because when Parliament sat, gentlemen could be counted upon to come to town. To understand Regency gentlemen, then, it behooves us to understand Parliament during the Regency.

Parliament comprises the House of Lords and the House of Commons. Both opened between November and February (see below for exact dates) and generally closed by July 30 during the Regency. Sessions started at 3:45pm on Mondays, Tuesdays, Thursdays, and Fridays and ran until late at night. So, a gentleman who is an avid Parliamentarian would still have time for Almack's, a Saturday evening ball, and Sunday service at St. George's Hanover Square.

He did, however, have to sit through a great deal of posturing. The Prime Minister and his cabinet introduced all legislation. A bill was read three times in one house before going to the other. Members presented speeches up to 3 to 5 hours long on major issues. And all this while the other members sat on high-backed benches not unlike church pews.

After the speeches, the Speaker of the House called for a vote. Voting was not as easy as raising your hand or marking a ballot. Generally, those for a bill called "aye" and those opposed "nay." When voices weren't enough to tell which side had won, the Speaker might ask all those for the bill to step to one side of the chamber or to exit into the lobby and be counted as they returned. Further, the House of Lords could veto any bill approved by the House of Commons. A quorum in the House of Lords consisted of only three people, giving power into a very few hands. During the Regency, however, the monarch could not veto a decision made by Parliament. 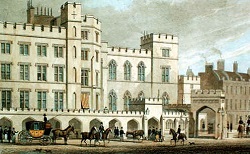 The House of Lords consisted of the Lords Spiritual (two archbishops and 24 diocesan bishops) and Lords Temporal (hereditary peers, peers granted peerages by the Regent on advice of the Prime Minister, and Law Lords, recruited from High Court Judges). No Catholic or Jew could be a member of either house. However, many peers opted out of attending. Indeed, to ensure a good attendance during the trial of Queen Caroline in 1820, the members of the Lords had to be heavily fined for missing a meeting.

The friends of the aristocracy were found in high numbers in the House of Commons. Because seats had been apportioned long ago, the Commons was packed with representatives from "rotten boroughs." These were locations that had become parkland or had fallen into the sea so that a single nobleman owned the right to vote for the seat. That nobleman frequently gave the seat to his friends or younger relatives. My hero in one of my books, The Incomparable Miss Compton, got his start in Parliament through such a seat owned by his cousin. 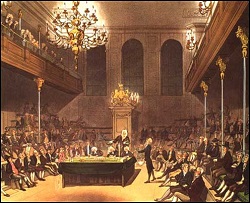 When seats were voted upon, a tidy donation often cinched the outcome. Robert Stewart, then second son of the Marquess of Londonderry, supposedly obtained the seat for County Down for £60,000.

A gentleman also had to decide upon party loyalty. The ruling party during the Regency was the Tories (conservatives). Simply put, they believed in the divine right of kings and church. Their chief aim was to keep things unchanged. The opposing party was the Whigs (liberals). They believed in the rights of the "common" man. Their chief aim was for reform - of Society and especially of the government. They would not achieve their ends until 1832, but the debate sparked by their ideals gave everyone plenty to talk about during dinner parties.

Special thanks to Nancy Mayer, Regency researcher extraordinare, for pointing out new research in this area. You can learn more about Nancy at her website. Further thanks to Basil Peidis for sharing his research on Parliamentary matters.

Meeting Dates for Parliament During the Regency

During the Regency, Parliament met at least once a year to vote on the military budget and various bills. Gleaning dates from a variety of sources, Parliament was in session during the following times:


Find out how a Parliamentary gentleman seeks a bride in The Incomparable Miss Compton.